The 10 Most Dangerous Dog Breeds

Dogs are often seen as man’s best friend, but not all breeds are created equal. Based on research, some dogs are considered more dangerous.

While any dog can bite you and cause personal injuries, some dogs have more of a propensity to do so. The following dogs, therefore, have a reputation, statistically, for being more aggressive or violent.

Dogs may have aggression issues if they’re not obedience trained or they are not socialized at an early age. They may also tend to bite more if they have little interaction with their owner. Dogs may also exhibit hostility if they have not been spayed or neutered.

Some dogs are more fierce when they feel sick, scared, or threatened. Therefore, it’s important to play it safe around all dogs. However, it’s also important to note those breeds whose temperament leads to more dog attacks and injuries. 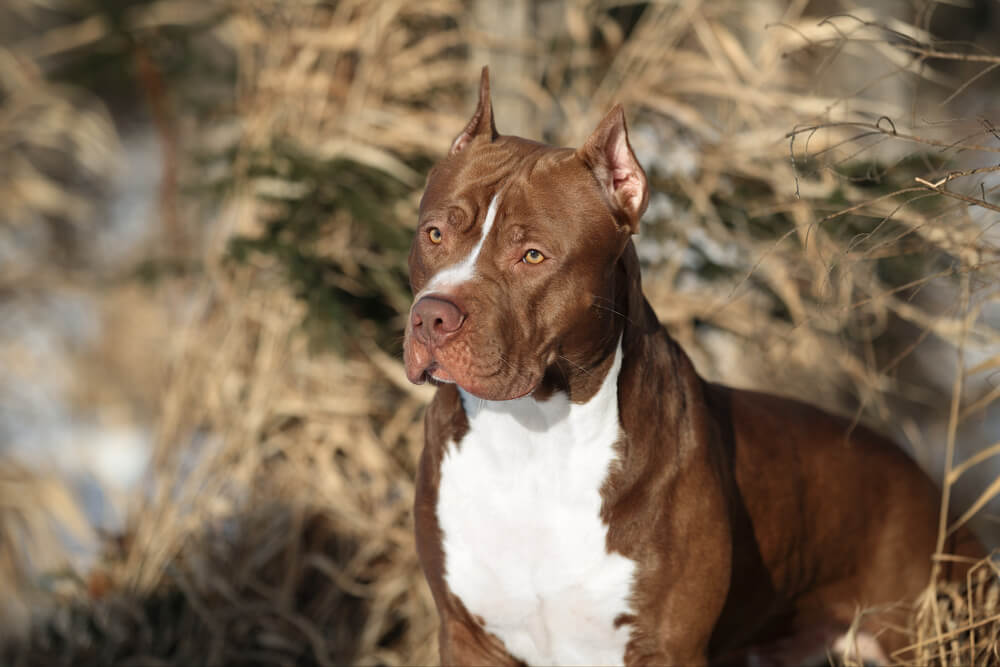 The American Pit Bull Terrier is considered one of the most dangerous dog breeds – both in the U.S. and internationally. They are a very aggressive breed and have been known to attack and kill people. They are also very strong dogs and can easily overpower anyone that stands in their way.

In fact, bully breeds, also known as the American Staffordshire Terrier, have been feared by the public for decades. This dog is indeed stereotyped, given its reputation for unpredictability. Their display of aggression has also been supported by media reports and claims.

Data shows that these dogs make up about 6% of the dogs in the U.S. However, 68% of Pit Bulls have been responsible for dog bites since 1982. The CDC supports this research, concluding that Pit Bulls are responsible for more fatalities than any other dog breed.

Moreover, multiple sources state that the victims most at-risk for attacks are children. A report circulated by the American Animal Hospital Association revealed that Pit Bulls bite the most people, at 22.5%, followed by mixed breeds and German Shepherds.

While a PiIt Bull has the highest bite risk and the highest average of injury per bite, breeds such as the Akita have a lower biting risk. However, the damage caused by their bites was high. 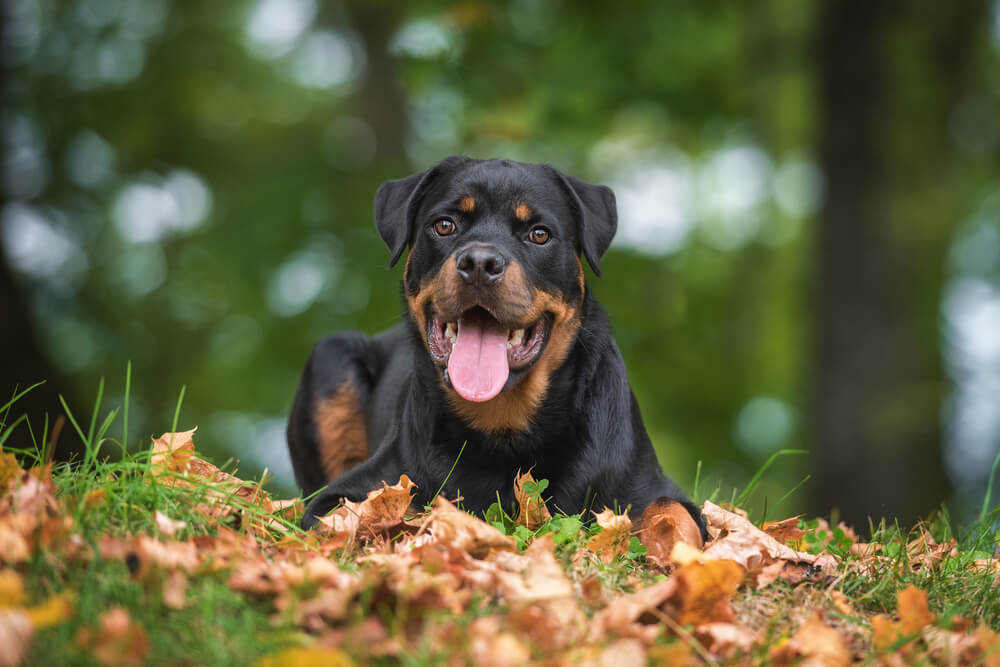 Rottweilers are large, powerful dogs with a strong bite that can easily cause serious injury or death. In addition, they are often aggressive and territorial, making them a serious threat to both people and other animals.

Ireland, Portugal, and Poland all have laws that ban people from adopting or owning these dogs. The German dog breed is considered a watchdog, protective, and loyal to its owners. However, this sense of devotion makes any outsider–dog or human–a threat and at risk for a dog bite attack.

A study conducted by the CDC showed that Rottweilers were responsible for 29 human deaths over the past two decades, making them the second most dangerous dog breed on record. 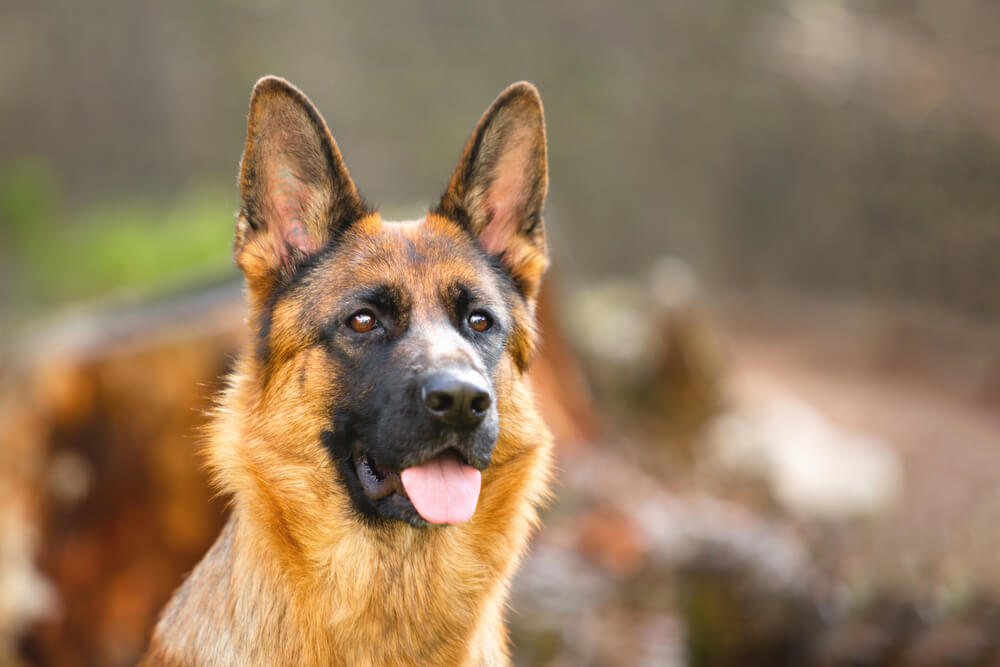 German Shepherds are one of the most popular dog breeds in the world, and they’re also one of the most dangerous. The dogs were originally bred for herding and guarding sheep, but they’re now often used as police dogs, guard dogs, and service animals.

German Shepherds are large, strong dogs with a lot of energy, and they can be very aggressive if not properly trained and socialized. If a dog owner owns a snappy Chihuahua, its bite can cause damage but is not as pronounced as that of a German Shepherd.

A German Shepherd’s bite strength can be very serious – sufficient enough to break a bone or rupture a blood vessel, causing a person to bleed to death. The breed, which is possessive and territorial, may attack if it feels someone is invading its space or if it receives unwanted guests.

To ensure the dog is more compliant, a dog owner should train the dog when it is a puppy. The earlier they begin, the better. Socialization is an important component of the dog’s training. While the dog may feel threatened, it will be less dangerous.

Also, it is important to note that German Shepherds, who are older, may experience more aggression because of old age. If they’re hurting, they’re more likely to become irritable and bite someone out of fear or pain. 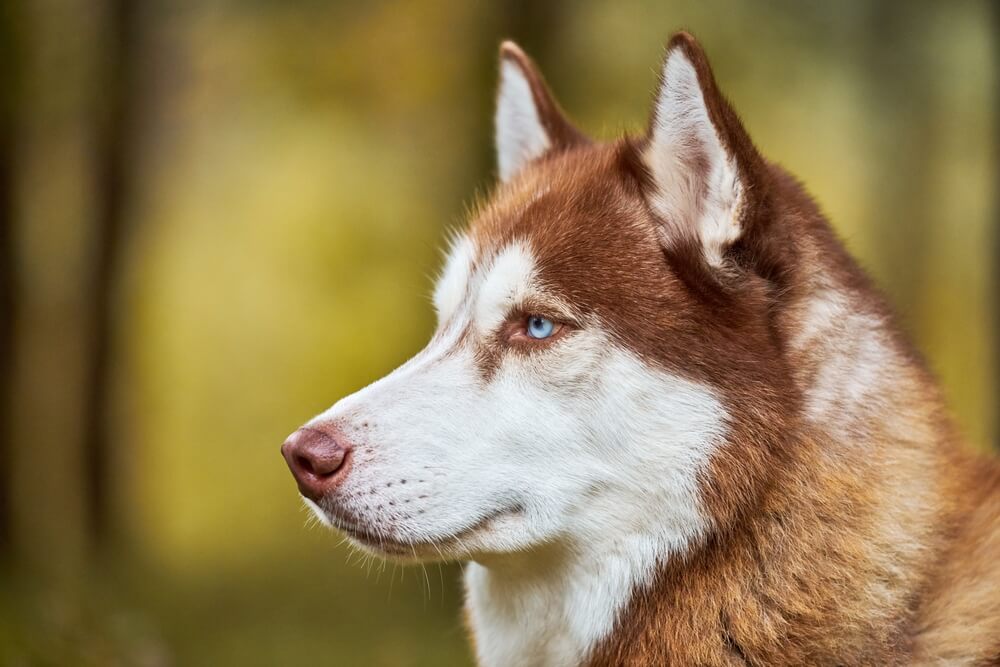 A Husky is both intelligent and difficult to train. Therefore, owners should obedience train their dog when it is still young.

While the CDC states that huskies are not a major health threat to the public, their large size and lively manner can lead to injuries or death. The dogs are responsible for about one fatality annually. Their incredible strength does not exactly make them kid-friendly. 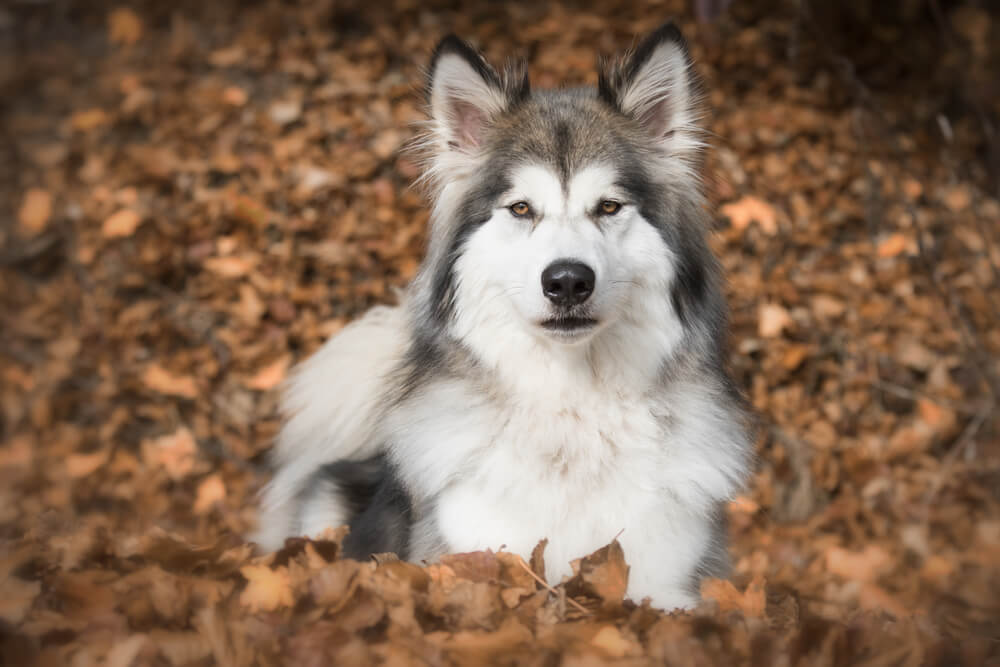 Most people think of wolves as dangerous, ferocious animals. But did you know that there are actually wolf hybrids? A wolf hybrid is a cross between a domestic dog and a wild wolf. While they may look like cute, cuddly dogs, they can also be dangerous.

What makes the wolf hybrid harmful is the fact that it’s a challenge to train and control. That makes the dog a dangerous canine to have around people, especially children.

Moreover, if they escape from their property, they can be difficult to catch because of their partly wild nature. Any animal that is not fully domesticated can pose a danger and threat to humans.

It’s also important to be aware of some of the myths and facts surrounding the dog. For example, it’s a myth that this type of dog is a good guard dog. Because a wolf’s true nature is shy, they usually do not fare well as protection dogs.

Their aggressive tendencies often stem from fear, which makes them unpredictable, if not hard to control.

They also are more prone to infectious diseases, which can compound a dog bite injury. In fact, there are some questions about the efficacy of certain dog vaccines in some wolf hybrids.

Also, don’t believe the myth that a wolf hybrid is a Malamute or Husky. Malamutes and Huskies are separate dog breeds. 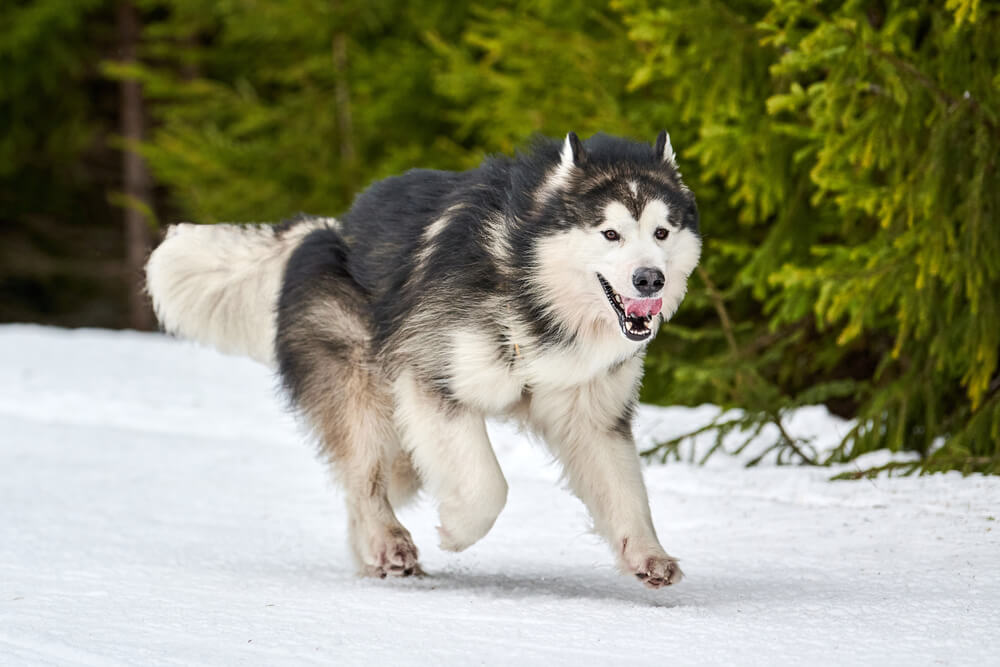 The Alaskan Malamute is a large breed of dog that was originally bred for hunting and working in the Arctic. They are strong, aggressive, and powerful dogs that can be very dangerous if not properly trained and socialized. They are not recommended for first-time dog owners or families with small children.

If a Malamute has been abused or had a bad experience in a rescue shelter, it will tend to be more aggressive. Therefore, socialization and kindness will prevent this dog from behaving aggressively toward people. 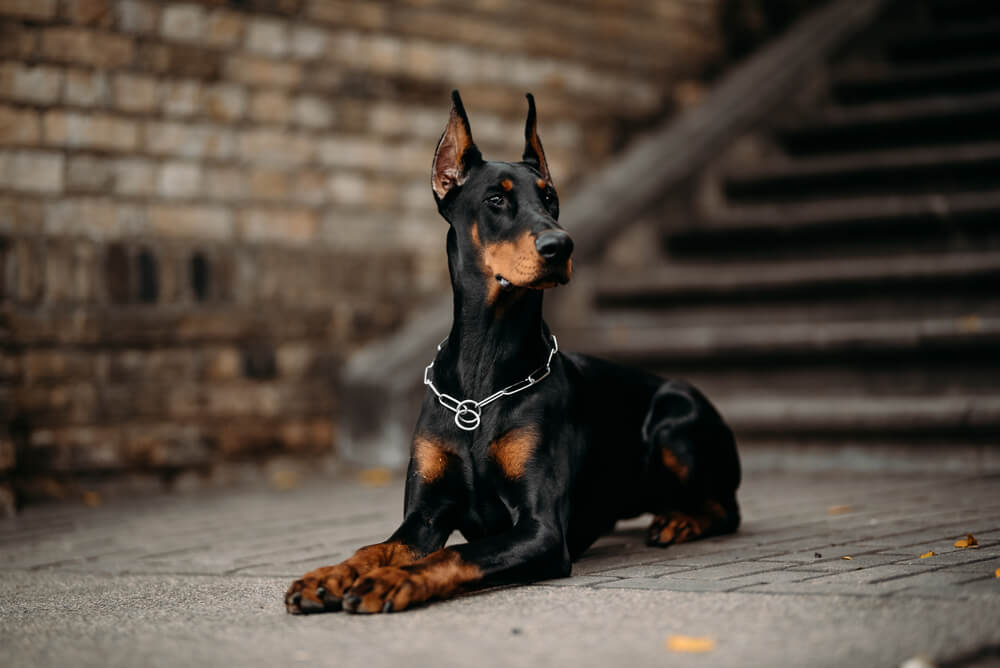 The Doberman Pinscher indeed can be a fearful dog to own or come across unexpectedly. You might liken it to an unanticipated meeting with a grizzly in a remote forest. Moreover, the dog’s bite is considered the strongest bite on record. The dog is reported to have 600 pounds of pressure in its attack bite – something which makes it a formidable foe.

Because the Dobie is a smart dog, it can be aggressive on command. One nine-year-old boy was killed by a Doberman Pinscher in 2001. The dog’s owner was found to be negligent, as they had not kept the dog properly supervised, and, instead, had trained the animal to be aggressive. 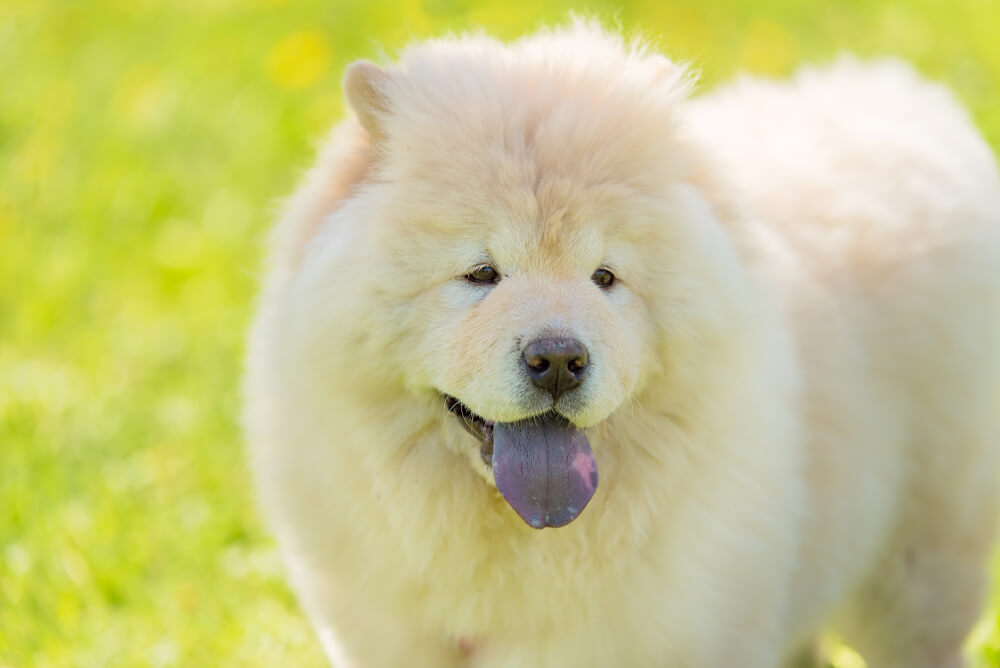 While the Chow Chow resembles a cuddly and big teddy bear, it also is an attack dog known for killing adults and children. Indeed, looks can be deceiving, as the dog was responsible for over 238 attacks between 1979 and 1998. Of those incidents, 40 of the attacks led to fatalities, and 37 of the victims were children.

Therefore, the dog, which originates from China, is considered a high-risk pet. Given that it can weigh up to 70 pounds, it can be extremely dangerous if it feels provoked, scared, or threatened. 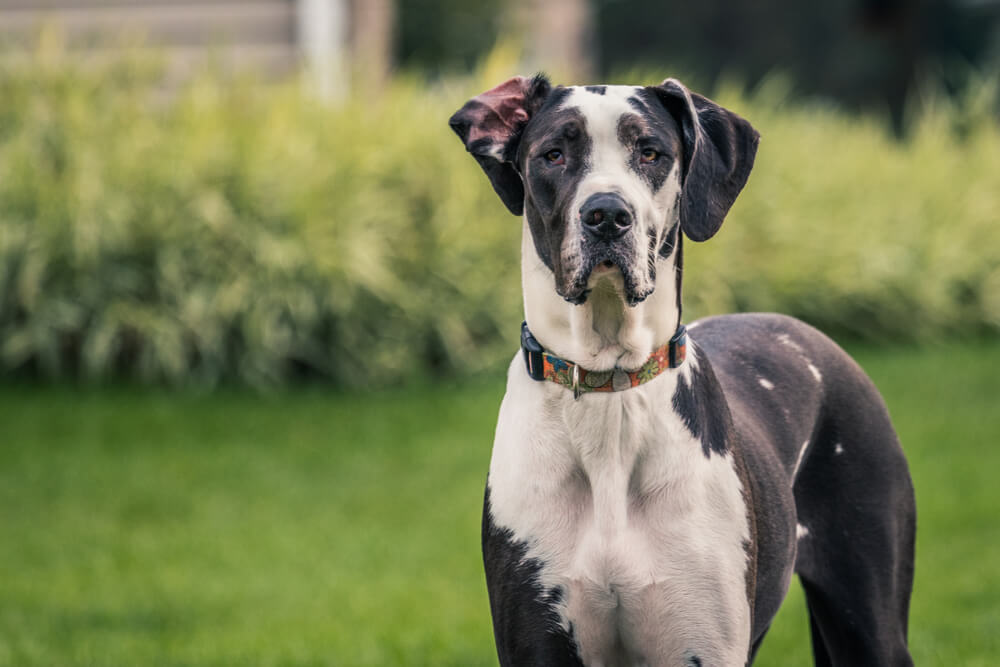 The colossal size of the Great Dane makes it dangerous if it is scared or threatened. Otherwise, the dog is considered a large and gentle canine friend.

Don’t let the name fool you. The dog is a German breed of dog and does not hail from Denmark.

The dog definitely is a large-sized canine, measuring over 30 inches in height. Therefore, the animal towers over other “dangerous” dogs, such as Dobermans and German Shepherds – by several inches.

When it stands on its hind legs, the dog is taller than most humans. It also carries a good deal of weight – about 180 pounds. With these two factors in mind, people should be wary if a Great Dane acts threatened or aggressive. The dog can be extremely difficult to control, even if an owner is responsible and normally manages the dog’s behavior well.

The dog’s ears are also noticeable and naturally grow folded over. Some owners will crop their dog’s ears.

The American Kennel Club reports that the Great Dane is the fourteenth most popular breed of dog in the U.S. In fact, the popularity of the breed continues to rise, so even if it is considered dangerous, many people adopt and own the Great Dane as a pet.

Most owners report that their Great Dane is good-natured, laid-back, and intelligent. However, it also is protective and territorial – two traits that may pose problems, given the dog’s height and weight. 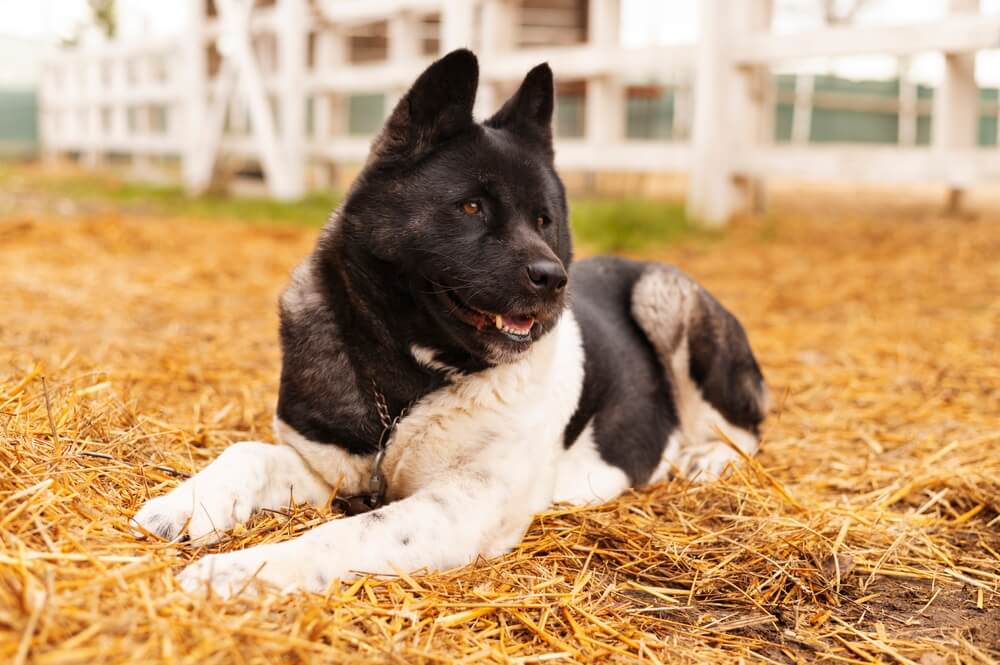 The Akita is a large breed of dog that originates from Japan. They are known for being very loyal and protective of their owners, but they can also be aggressive toward strangers. Akitas are also very strong dogs, so if they attack someone, the results can be devastating.

What makes the dog especially treacherous is its scissor-shaped jaw. Because of the jaw’s shape, the dog’s bite is exceptionally powerful. Also, you cannot open the jaw unless the dog decides to release it. So, if the dog bites, it can be deadly or life-changing for some victims.

Certain towns in Indiana have passed ordinances for certain dangerous breeds of dogs, especially Pit Bull Terriers. For example, in Schererville, Pit Bulls are banned from dog parks, while other cities have deemed the dogs dangerous. The town of Greenville has special restraints listed for dogs, such as Akitas, Chow Chows, Doberman Pinschers, Pit Bulls, Rottweilers, and Wolf Hybrids.

If you need a dog bite attorney, get in touch with him or her right away. You only have two years to file a dog-bite lawsuit in Indiana. Contact Blackburn Romey today for all the details and to schedule a consultation.

Personal Injury & Wrongful Death is all we do

Get In Touch With Us

or call us at